My calender of events:  Upcoming adventures 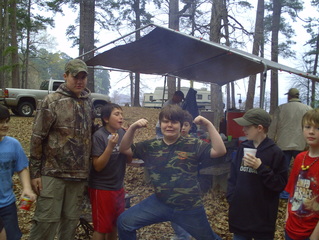 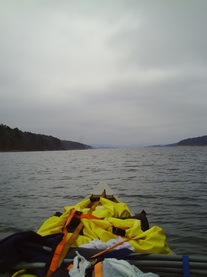 Lake Ouachita trip was AMAZING!  The weather was cold, windy, rainy, and at times doling out golf ball sized hail.  But we were prepared for anything.  The first day we set sail from Lake Ouachita State Park at about 1130 am.  We canoed for 2.5 hours to a very large island off the north coast of the lake.  The wind was about 10 knots out of the east which was great since we were paddling west.  The seas were choppy but did not pose any serious threats to tipping the canoe.  I own a fiberglass Mohawk 16 footer.  I can comfortably carry 800 lbs in this canoe and I've used it many lake and river excursions.  This trip I carried all gear with me and the canoe handled very well given the current conditions of the lake.  My brother and Rooster paddled a 14 foot Pelican Dakota Royalite canoe.  Very light and maneuverable but sketchy in this type of rough seas.  They handled it very well however and was able to keep up with my faster, straighter tracking Mohawk.  Side note: Paddling a canoe in windy choppy seas by yourself can take it out of you.  So be sure you're up to the challenge!  The water clarity was about 20 - 30 feet.  Due to the weather we encountered very minimal boat traffic.  On the last day, we didn't see a single craft!  We spent 3 days on the south eastern side of an island.  We were exposed to the wind, but the view was incredible.  Plenty of fire wood and warm fleece we fared well.  The next two days we spent exploring the steep and rocky islands of that area of the lake.  The island we were on was about one square mile of steep rocky ridges that made climbing them a little tiresome.  However the forested isle was very densely forested with pine, oak, red cedar, and hickory with no underbrush to impede exploration.  We saw a few beaver tracks on the shore line but as for animal life, we only witnessed birds.  We circumnavigated the island during a calmer, brighter part of the second day.  We were surprised to find that on the leeward side of the island was a literal underwater forest!  What we thought were simple tree stobs were actually the tree tops of what was once a dense hardwood forest!
It was a little spooky because of the greenish hue of the water mixed with the depth of visibility gave an almost ghostly appearance to the bare, lifeless trees below the surface.  We later found out that the lake was created when the Ouachita River was dammed in 1953 and about 90% of the existing forest was not logged but completely submerged below the up to 200 foot lake!
Our final day saw a constant drizzle from the time we ate breakfast to the time we launched.  We paddled into a head wind the entire return trip which added an hour to the time and extra muscle fatigue to the paddler!  We reached the marina landing at 5 pm and at that moment the rain became torrential.  So thankfully the heavy stuff waited until we reached my truck.
For more info on this trip and many others like it, feel free to post a comment on my Blog.